Walking Purchase Park Go For A Hike In Your Backyard, The Salisbury Press, 2008

April 23, 2008
Walking Purchase Park
Go For A Hike In Your Backyard
By SHARON SCHRANTZ
Special to The Salisbury Press

Did you know that there is a mountain bike/hiking trail in the area? It is not a well known fact but right off of Broadway, going into Fountain Hill, there is a beautiful 570 acre park where there are hiking and mountain bike trails. Three years ago, Salisbury Township, Lehigh County and the City of Allentown granted the Valley Mountain Bikers the ability to create a system of trails in the Walking Purchase Park. The members of this club, local cyclists and area residents have since created about 10 miles of trails.

What this means is that there has been about 5,000 man hours hauling soil, rocks and other materials to create a place for people that enjoy outdoor activities such as mountain cycling, hiking, trail running or just appreciating nature. Volunteers have given their time before and after working their normal weekday activities as well as spent time on weekends creating these running and cycling trails. The trails were made under the specifications of the International Mountain Biking Association (IMBA) based in Colorado. The hours are equivalent to 2.5 employees working 40 hour weeks for one year. This is quite an impressive accomplishment, to say the least.

The task has now become a destination for people who enjoy outdoor activities. The Valley Mountain Bikers can be very proud of their accomplishments as results of their hard work are noticed by those that visit the park. A person walking their dog back in February said "Thanks for working so hard. These trails are great!" People have expressed deep appreciation especially considering that three years ago, these trails did not exist.

Cyclists have observed the careful planning of textbook switchbacks which were created to negotiate the steep terrain. Another item of smart trail making is the choke point which is the natural way to aid in keeping motorized vehicles off the. new trails. Two trees planted closely together is one way of establishing this.

All of this activity to improve the park has had great impact on the illegal activities that plague the park. From illegal dumping to motorized all-terrain vehicles usage and other more serio'us activities, the positive presence of the cyclists and hikers have reduced these incidents ill the southern end where the trail system is present. There have been several times where a cyclist has noticed unlawful activities and notified law enforcement.

To further enhance the park and keep the environment as it should be, the members of this club have spent time cleaning up the park. These events bring numerous volunteers. Gloves and large plastic bags are provided by PennDot. A 30 cubic yard dumpster which is donated by Waste Management is filled. This year is no exception.

In celebration of Earth Day, over 42 cyclists and area residents volunteered April 19 in these cleanup efforts. Bethlehem Brew Works donated food and Bulldog Beverages donated water. Quakertown National Bank was also instrumental in donations to make Saturday's event a huge success. The dumpster was full along with another pile of refuse along side of it. All along Cardinal Drive/Constitution Drive were bags of refuse as well as a large pile of discarded tires.

John Eberhard who is a resident of Constitution Drive in Salisbury Township has lived in this area for 29 years. He and his neighbors began requesting help to clean up the area in the 1980s. "I'm a real rabble-rouser and never intended to be so but the crime, the trash and the neglect just got to me."

According to Eberhard, others have made attempts to clean up the area such as John Snyder, who owns a junk yard in Allentown, the Sierra Club and The Pennsylvania Sportsman.

Donald Marushak who used to be in charge of the Allentown Park system also became involved, as a part of this park is within the Allentown city limits. "When the VMB became involved, there was definitely a difference," says Eberhard. The discarded tires became a big concern due to mosquitoes. The tires retain water which in turn attracts mosquitoes and becomes a breeding ground ' for their larva which invites I the possibility of West Nile virus. Getting rid of the tires is one goal of this cleanup . crew. Other items mentioned that have been dumped are sofas, mattresses and toilets.

The site overlooks the Allentown State Hospital, railroad tracks and the Lehigh River. The site is also under the Wildlands Conservancy and is part of the natural corridor that is being established by the conservancy. It follows the Lehigh River.

Several members of the club spoke about the efforts. Doug Pinkerton organized this cleanup effort and his enthusiasm for the cyclists as well as the environmental issues is contagious. Mindy Heller of Bangor and Butch Bittner of Saylorsburg came to do their share of clean up. They trekked out onto one of the trails and came back with a large bag of garbage and tires. James Benetzky from North Catasauqua, a student of Northampton Area Community College, saw a sign at the college and came out to help. Dave Leibert is the trail designer. He has put in more than 6,000 hours of volunteer time as he has created 10 miles of trails.

In the fall of 2005, the red loop trail was completed. Joe Transue from Danielsville is a VMB member. "The terrain of this park, even with the trails, is tough. It is not meant for the beginner." He teaches kids how to mountain bike ride at Jordan Park and Jacobsburg Park. He is an advocate for mountain bike riding as well as a lover of nature. These trails actually enhance tourism in the Lehigh Valley because people do not just visit an area for amusement parks and shopping.

Although much has been accomplished, there is still more to do. The dumping and ATV issues continue although they have been on the decline. There are still improvements to be made. When you want to go hiking or mountain biking, remember this park is in the Lehigh Valley and a trip to the Poconos is not necessary. It is worth checking out the area for its natural and rugged beauty. For the record, comfortable shoes, snacks and water would be a good idea. For more information about the club and its involvement, please e-mail info@bikevmb.com.

1) John Eberhard who has lived on Constitution Drive for 29 years helped with the clean up April 29. This is the beginning of the tire cleanup.

2) Dave Leibert, left, and Joe Transue removing one of the many loads that was cleaned up on the trails and in the woods at Walking Purchase Park.

3) James Benetzky, left, from North Catasauqua, an educa- I tion major at Northampton Area Community College, joins the group. He saw signs at NACC asking for help. Behind I Benetzky is Dave Leibert who is the trail designer for the park. On right behind the truck, is Joe Transue from Danielsville. He has been a member of the Valley Mountain Bikers for five years. On far right is Trevor Lanning from Emmaus. He is the vice president of the club.

4) Mindy Heller and Butch Bittner remove a bag of garbage and one of many tires found in the park.

5) The results of a day of cleanup.

Reprinted with permission of Salisbury Press, All Rights Reserved. 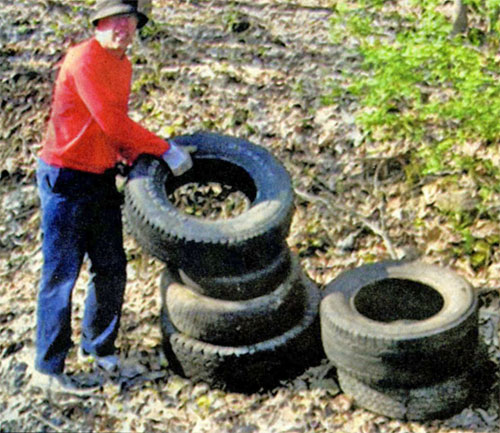 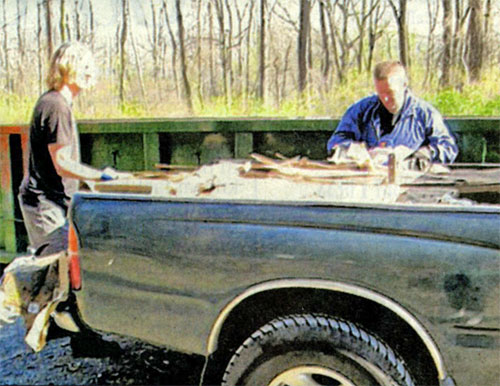 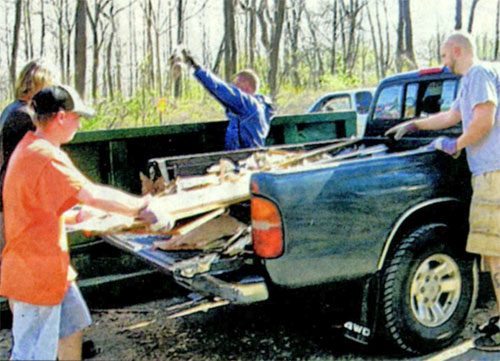 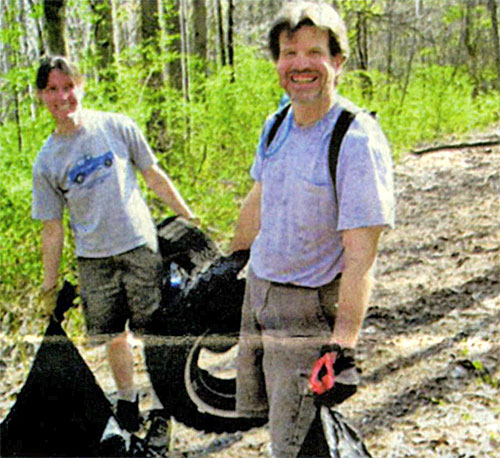 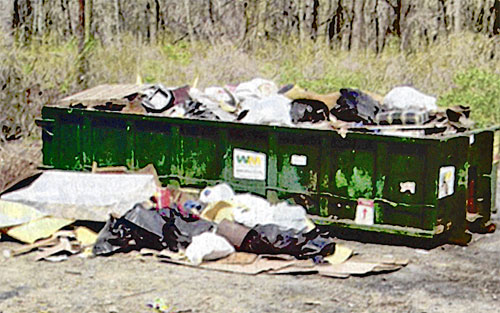