A decade ago, one rider left his hometown in search of bigger mountains, better trails and a different life. But in his absence the town grew up, built trails, became a little cooler. Or maybe it always was.

October is the bridge season in eastern Pennsylvania, when temperatures can swing from steaming hot to frigid in just a few hours. Tonight, the weather is especially capricious, mixing cool rain into the air thick with Indian summer warmth. In a few hours it could be raining, sleeting, or dank with humidity. Riders shuffle through their cars, adding and shedding layers. Tension builds while we wait in the parking lot of Action Wheels bike shop for the Wednesday group ride to begin. Anything can happen.

As night grows near, the weather finally settles; the air is cool, but a tinge of humidity prevents it from developing a serious bite. Twenty riders pedal from the shop, over the Third Street Bridge into Southside Bethlehem, past Saint Luke's hospital and a Civil War-era cemetery advertising that it still has plots left for sale. This is my hometown, the place where I grew up, and then left.

Though it lacks the mountains and open spaces of the West, the terrain here is well suited for mountain biking. Steep, dense forests rise to the south and gentle hills extend through the Lehigh Valley to the north before slamming into the larger Appalachians. Salisbury Park, site of tonight's group ride, is a rolling, rocky spike of land on the southern banks of the Lehigh River. Until recently, it was frequented mostly by transients and teenagers looking for a place to shoot bottles of Jim Beam and cans of Keystone. Now, it's home to more than a dozen miles of freshly built trails.

Led by John Ronca of Action Wheels and local pros Jay de Jesus and Rob Lichtenwalner, we spread into a long line and venture into the woods on twisty singletrack still damp from the rain. The trail darts through maple and elm, exploding with fast turns and snappy elevation changes. Farther down, babyheads swell in the freshly cut trenches and fallen logs crisscross our route like intricate fencing. The trails demand careful wheel placement, subtle shifts in weight and a riding style I'm not entirely used to, or comfortable with.

Unlike the steep sandstone hills of Southern California where I now live, these trails are sharp and rugged; granite rocks and fallen timber pinch and poke at my wheels. The place is familiar, but the trails are foreign. I'm near the front of this conga line of riders, but my rhythm is off, and I'm missing the beat. My shaky balance is only amplified by jerky pedal strokes. It's not long before I plant my front wheel into the broad side of a jagged rock and topple over the bars. Riding, whether in eastern Pennsylvania or Southern California, is all about rhythm. And when that rhythm falters, the wheels fall off the proverbial wagon. I slip further back among the pack as the ride rolls on.

But even when the sun fades behind the trees and the ride extends into a pitchy darkness, a perceptible zeitgeist exists among these riders, one of universal giddiness, as if everyone is getting away with playing hooky. Who can blame them: They're enjoying the extended warmth of an Indian Summer, riding on trails most of them helped build, trails that didn't exist only two years ago, in a town that is just beginning to discover mountain biking.

For me, the experience is surreal. I moved from here years before these or any other mountain bike trails existed. Nearly a decade later, I've returned to ride them for the first time. A lot has changed in 10 years, for me and for this region. In many ways, I am experiencing my hometown for the first time.

A cool rain hangs over this city of 75,000, obscuring the mountains to the south and sending sheets of water down the cobblestones of Main Street. It's the type of gray rain that sucks the color from a landscape.

From the front door of the Wired Gallery and Cafe, nearly all of Main Street and downtown fall into view. Massive smokestacks from Bethlehem Steel's now-defunct blast furnaces rise above centuries-old Moravian town homes and fade into the clouds above. The historic Hotel Bethlehem, built on the site where the town's first residents settled in 1741, still anchors the far end of the street. But farther up, the street is swollen with modern cafes, brew pubs and ethnic restaurants that have moved into once vacant brick buildings.

None of this existed when I left town in search of bigger mountains, better trails and a different life. Back then, Bethlehem was beginning to sprawl. In the late '80s and '90s, its fertile fields were sold, plowed under and developed into suburban housing developments. For many, it became a bedroom community to New York and Philadelphia.

At the same time, Bethlehem Steel, the region's economic engine for 60 years, was crumbling. The plant had laid off its 60,000 workers and its mile-long factory sat unused, rusting and falling apart. It stopped producing steel in 1995, declared bankruptcy in 2001, and was sold to an international steel conglomerate in 2003. With residents moving to the suburbs and the town's largest employer removed, Bethlehem-economically and culturally-was failing.

And I left. I moved first to Maine, then Colorado and New Mexico before settling two years later in California. I rode and skied in the Rockies, the Sierras and Santa Ana Mountains. I fell into a comfortable career and decent life and mostly forgot about Bethlehem. I left behind friends and family and a city that could have used a little help.

But in the 10 years I have been gone, Bethlehem has undergone a transformation. The steel factory was closed, but it left behind a highly skilled workforce. Small, specialized industrial companies moved in and fueled growth. The region's dozen colleges continued to pump out educated workers. The sprawling housing developments brought middle-class families from New York, New Jersey and the suburbs of Philadelphia. And Bethlehem's two major hospitals expanded dramatically, creating thousands of high-paying jobs. Crime, poverty and high rates of illiteracy still persist-this is no Utopia-but the positive change is dramatic.

More importantly, at least to those of us who consider access to large networks of trails a crucial factor in determining quality of life, Bethlehem developed a serious mountain biking habit. Much of that work fell on the broad shoulders of Joe Transue.

The 36-year-old pharmaceutical salesman from neighboring Allentown saw potential not just in Bethlehem, but the entire region. Transue serves as IMBA's eastern Pennsylvania rep and he knew mountain bikes were being banned from world-class trails in the nearby town of Jim Thorpe. The lifelong resident of the Lehigh Valley knew there were dozens of neglected state and local parks ripe for mountain bike trails. He knew there was already a strong community of BMX riders and world-famous dirt jumps. And he believed mountain biking had a future here.

Four years ago, Transue co-created the Valley Mountain Bikers web site. It was primitive and did little more than list group rides, trail-work days and trips to the pub. But within a year, 50 members had joined. Then 100. Now, there are more than 250 active members. Transue is a friendly but convincing salesman, and with the support of the Valley Mountain Bikers he began lobbying to build trails in Salisbury and elsewhere. Most importantly, the site helped unite the town's small but growing mountain bike community.

Over the past few days, I've become comfortable on these trails. I've returned to Salisbury and sailed through those sections that presented so many challenges only days earlier. I traveled to Jordan Creek in Allentown for a night ride and even in the darkness of a moonless night, discovered a sense of familiarity. Intuitively, I followed the snappy turns and abrupt elevation changes.

I've become more familiar with the people too. On long rides in the woods and long nights afterward, I reconnected to this place, with Joe and John and Bobby, with old friends who don't ride bikes. We connect through shared experiences: we've lived, at least at times, in the same place-we've listened to the same radio stations, drank the same beer, eaten the same food, bought bikes from the same shop.

Leaves crunch and twigs pop, but the land is quiet, sounds from the city muffled by the rain. Rounding a corner, the trail drops into a series of high-speed switchbacks and a few deer jump from the brush and dart across the trail. I'm soaked by the rain and absorbed in the trails. They're pulling me further from the trailhead, and farther down the mountain.

The trail back is mostly uphill, slow and grinding over slick rocks and wet leaves. I spend as much time searching for traction as I do for the trail. An hour turns into two, and then three. Near the top, the rain finally relents, and I'm disappointed when I crest the final rise and turn onto a paved road. The road leads to a car, which leads to an airport, which leads to a plane that will take me away from here, again.

Ten years ago, I left family and friends and moved away from Bethlehem. The steel mill has closed and new trails fill the forests. New homes stand in place of once fertile fields and new stores occupy long-vacant buildings. But in reality, little has changed. My family still lives there and so do many old friends. The land is the same and so is the weather-cold in the winter,hot in the summer and freakishly indecisive in the fall. Maybe we're the ones who changeour hopes and priorities and diversions. We often journey long and far to find ourselves, only to discover that 'everything we hoped to find has been sitting all along in the spot we left it. 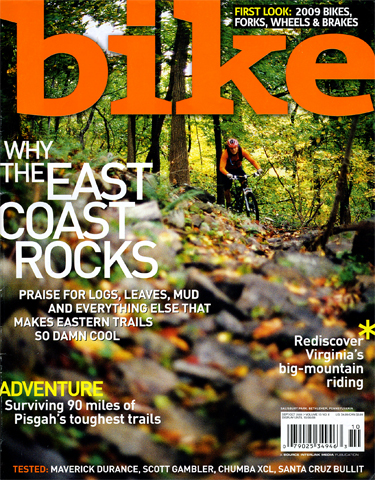